The entire Triad Kids Dental team is passionate about ensuring your child has a great trip to the dentist. Everyone from the doctors to the administrative team works hard to make sure you and your child leave with a great big smile.

Nothing would make our entire team happier than to show you why our patients voted us YES Weekly’s Best Dentist for the last four years in a row! 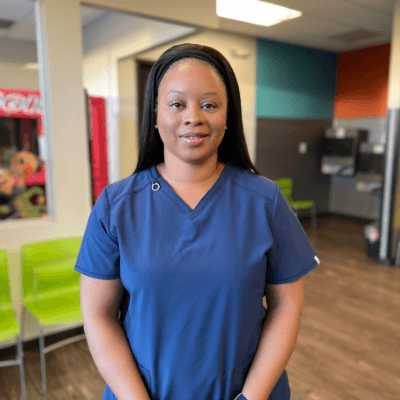 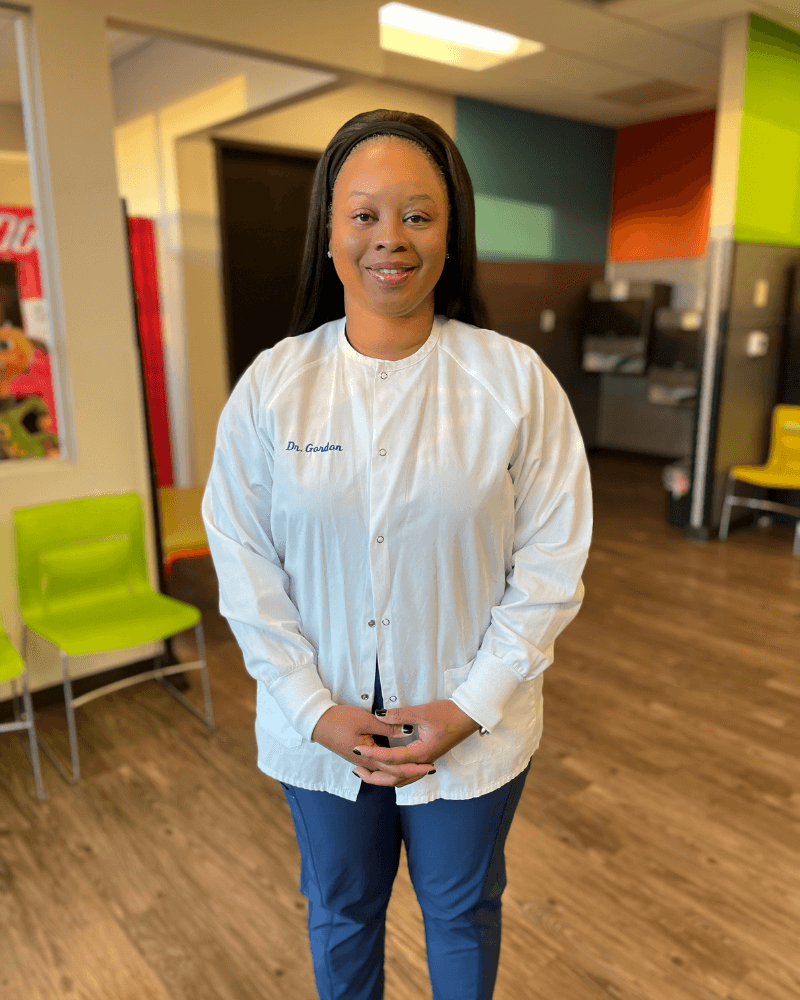 Dr. Gordon-Willis says she chose to be a pediatric dentist because, "there is never a dull moment with kids. The joy and excitement on their face is priceless."

Always with a dental tip to share, Dr. Gordon-Willis says "the key to healthy gums includes eating the right foods, flossing regularly, using toothpaste with fluoride, brushing daily, and visiting your dentist twice a year for a routine checkup."

TV Show  Her favorite TV show is a classic, 20 seasons and counting, Law and Order.

Staying Active  Dr. Gordon-Willis stays active by hiking and biking any chance she gets. 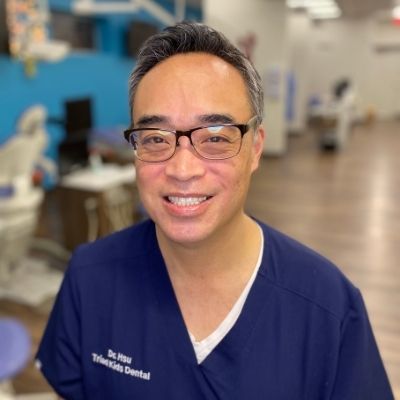 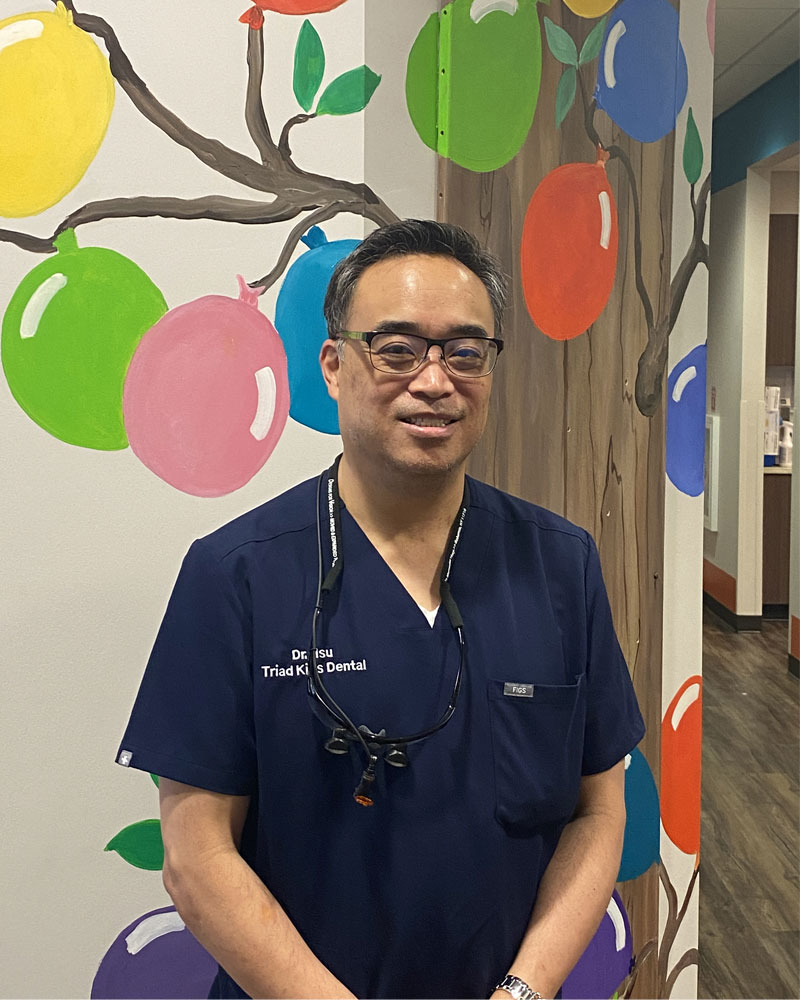 Dr. Chester Hsu (pronounced “Shoo”) was born in Syracuse, NY, but moved out west and grew up in sunny Livermore, CA. He attended UC Irvine where he earned a degree in Biological Sciences.

While in college Dr. Hsu had a serious bicycle accident that required extensive dental treatment. While this could have been a tragedy, it turned out to be the experience that inspired him to want to be a dentist. After graduation, he enrolled in the USC School of Dentistry then went on to complete his specialty in pediatric dentistry at Children’s Hospital of Michigan.

Dr. Hsu is an active member of the American Dental Association and the American Academy of Pediatric Dentistry.

Dr. Hsu likes working with kids because it allows him to express his natural personality, goofy with a dash of silliness. He knows that a visit to the dentist can be a stressful event, so he works hard at creating a positive experience that last a lifetime.

Favorite Hobbies: Dr. Hsu considers himself a bit of a foodie and loves playing board games.

Favorite Vacation(s): When away from the office, Dr. Hsu enjoys weekend road trips with his wife and two kids. 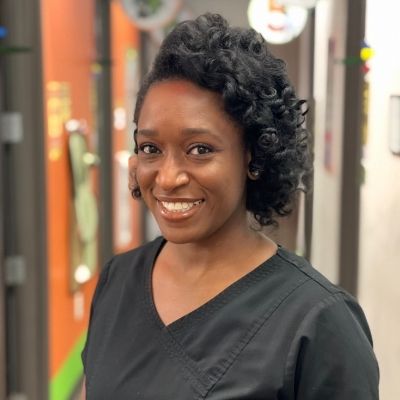 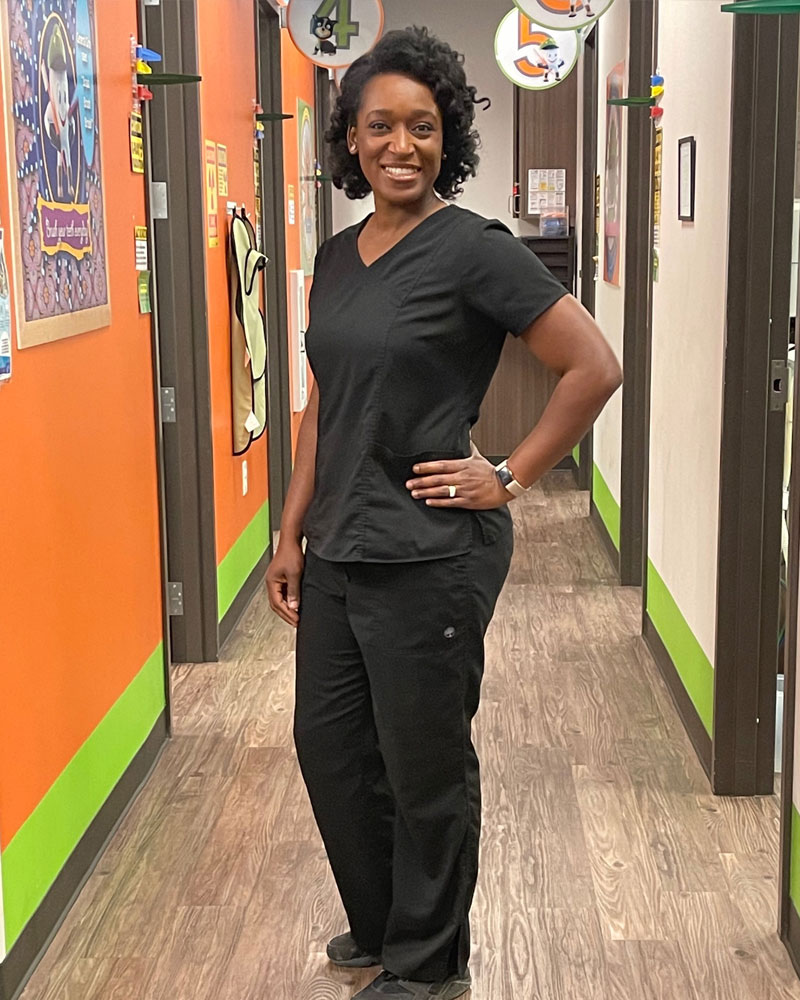 Dr. KaSheena Hollis was born in Moulton, Alabama. She attended Tennessee State University where she received her Bachelor of Science in 2005. She continued her education at the University of Louisville School of Dentistry and received her DMD in 2010.

Dr. Hollis had a wonderful dentist as a child and had an opportunity to shadow a dentist in high school. This experience prompted her to decide to pursue dentistry as a career.

Dr. Hollis makes her home with her husband, and her two sons, Kevin Jr., and Kaden.

Favorite Hobbies: When away from the office, Dr. Hollis enjoys arts and crafts and watching her favorite team, the Dallas Cowboys!

Known For: Dr. Hollis is well known for her outgoing personality, but ALSO her silly sock collection. 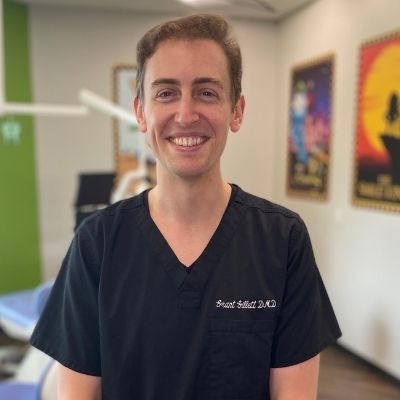 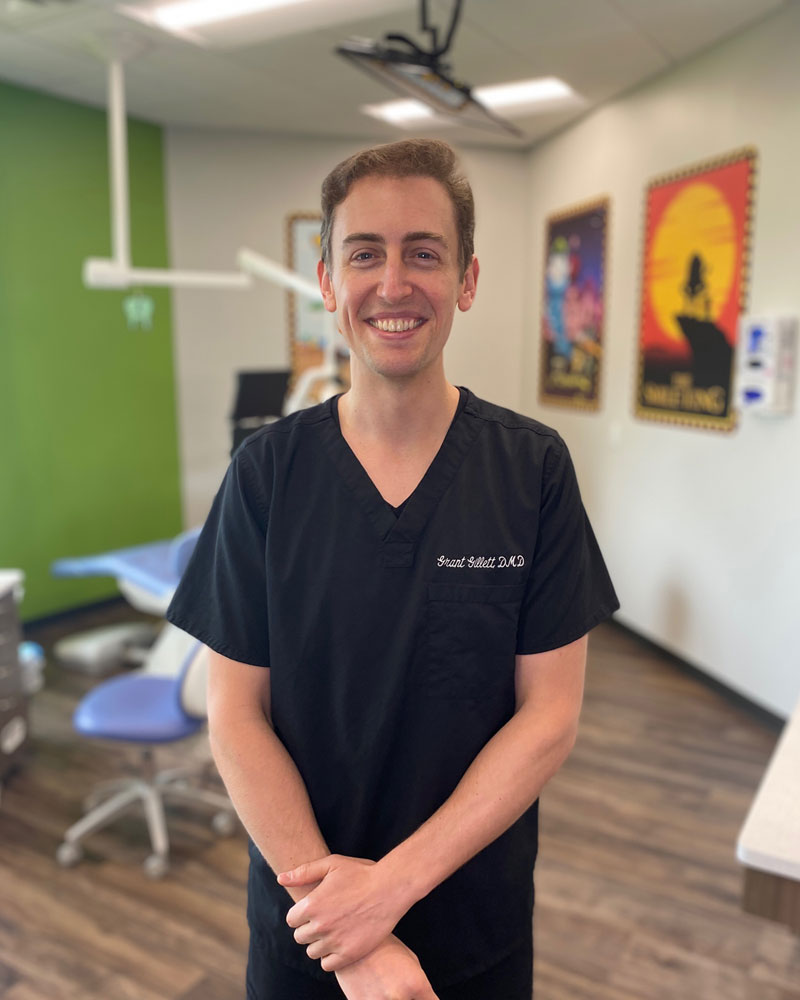 Dr. Grant Gillett was raised in Olathe, KS. He attended the University of Missouri-Kansas City where he received his degree in Biology in 2012. He continued his education at Midwestern University College of Dental Medicine and received his DMD in 2016. Dr. Gillett’s love for art and science led him to a career in dentistry where he can do what he loves and feel that he accomplished something good at the same time.

Favorite Hobbies: In his spare time, Dr. Gillett can be found hanging with family, playing sports, or cooking.

Favorite Interests: Dr. Gillett is also interested in botany (study of plants) and entomology (study of insects) whenever away from the office. 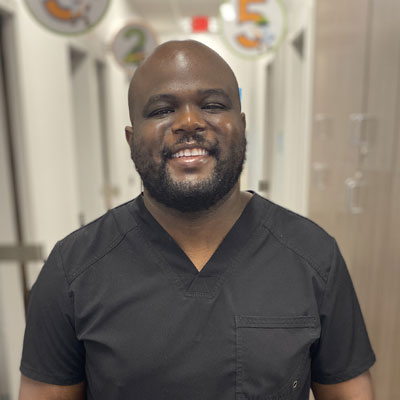 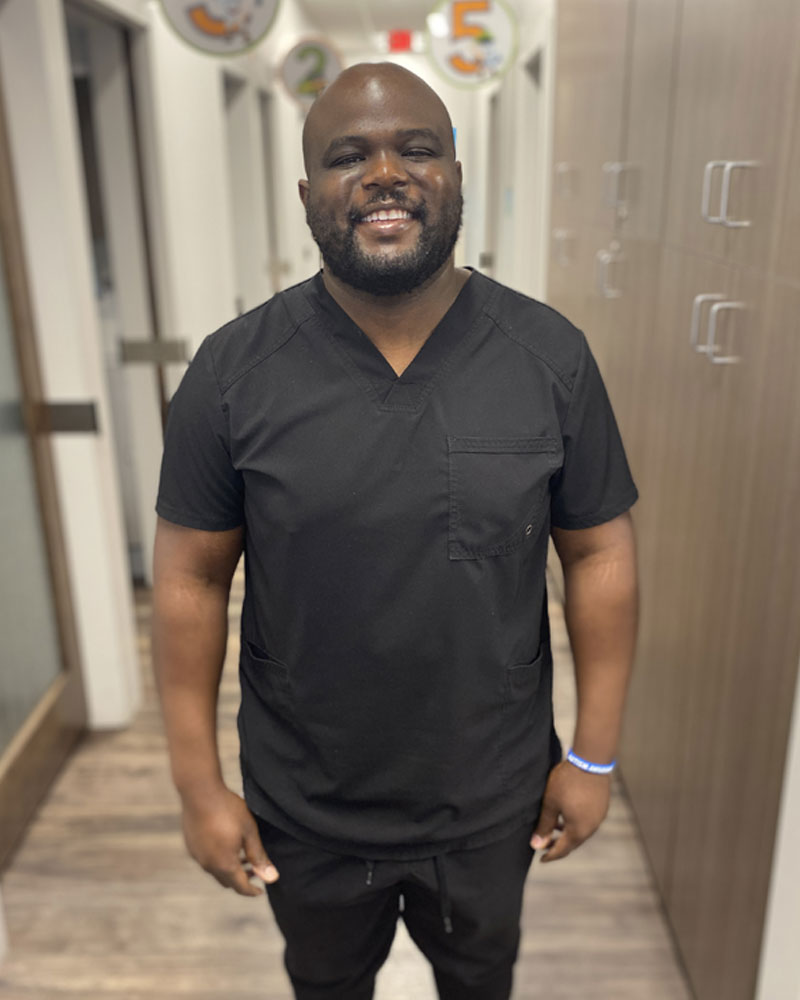 Dr. Rolandas Hill grew up in Vanndale, AR. He attended Arkansas State University and received a B.S. degree in Biology in 2007. After graduation he completed a year of research at Arkansas State. He continued his education at Meharry Medical College in Nashville, TN and received his DDS in 2013. Dr. Hill also completed his General Practice Residency at Meharry Medical College in 2014.

Dr. Hill was inspired to become a doctor because of his grandparents’ life experiences with heart disease and diabetes. Although they were able to seek treatment for their medical conditions, seeking dental care was not an option due to financial limitations. That lack of access to dental care for less fortunate people led him to the decision to become a dentist.
In his spare time Dr. Hill enjoys spending time with his children, Emery Rae, Kaleigh, and Emerson. 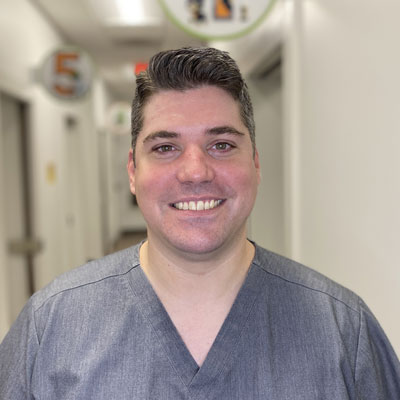 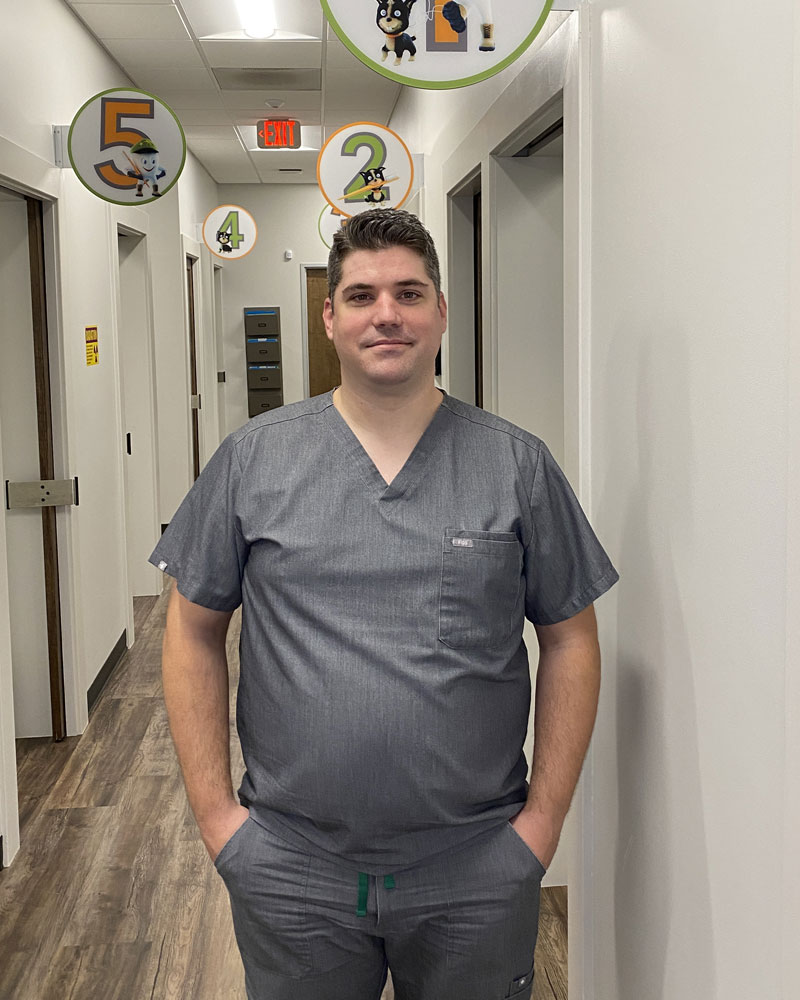 He volunteers annually for humanitarian trips to Latin America to offer free dental care to underserved rural communities. Dr. Smith is married and has five children.

Favorite Hobbies: Dr. Smith has a long list of hobbies, but a few of his favorites are backpacking, camping, going to the movies, and just spending time with his kiddos. 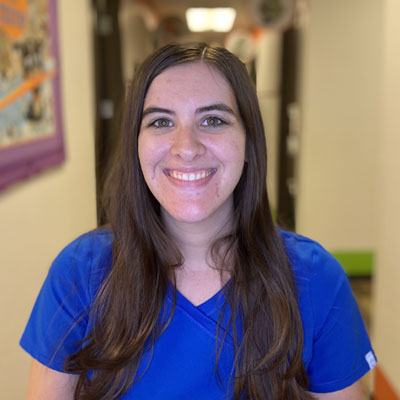 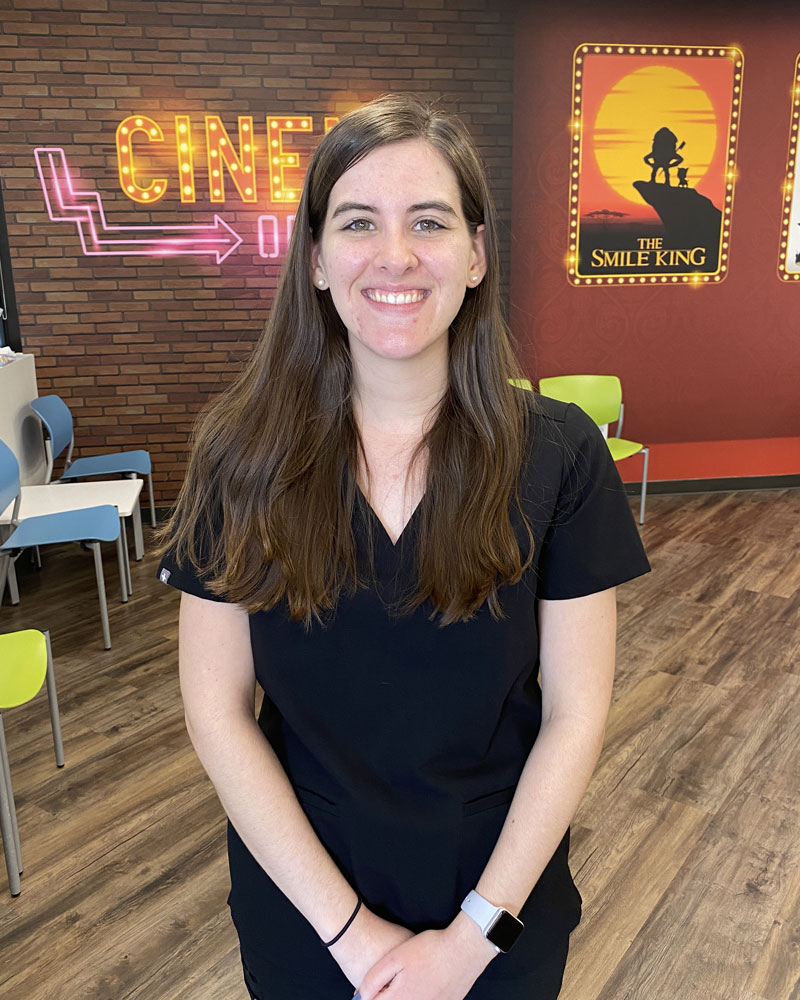 Dr. Chesley Orr is a native of Miami, Florida. Her decision to become a dentist started at the young age of 6 years old. She always had a positive experience when she visited the dentist as a child. After deciding her career path, she attended the University of Florida where she received a degree in Biology in 2013. Dr. Orr continued her education at Arizona School of Dentistry and Oral Health, where she graduated in 2018.

Favorite Hobbies: Dr. Orr loves to cook and bake in her spare time.

Favorite Team: When not in the office, Dr. Orr enjoys rooting for her old alma mater Florida Gators. Go Gators! 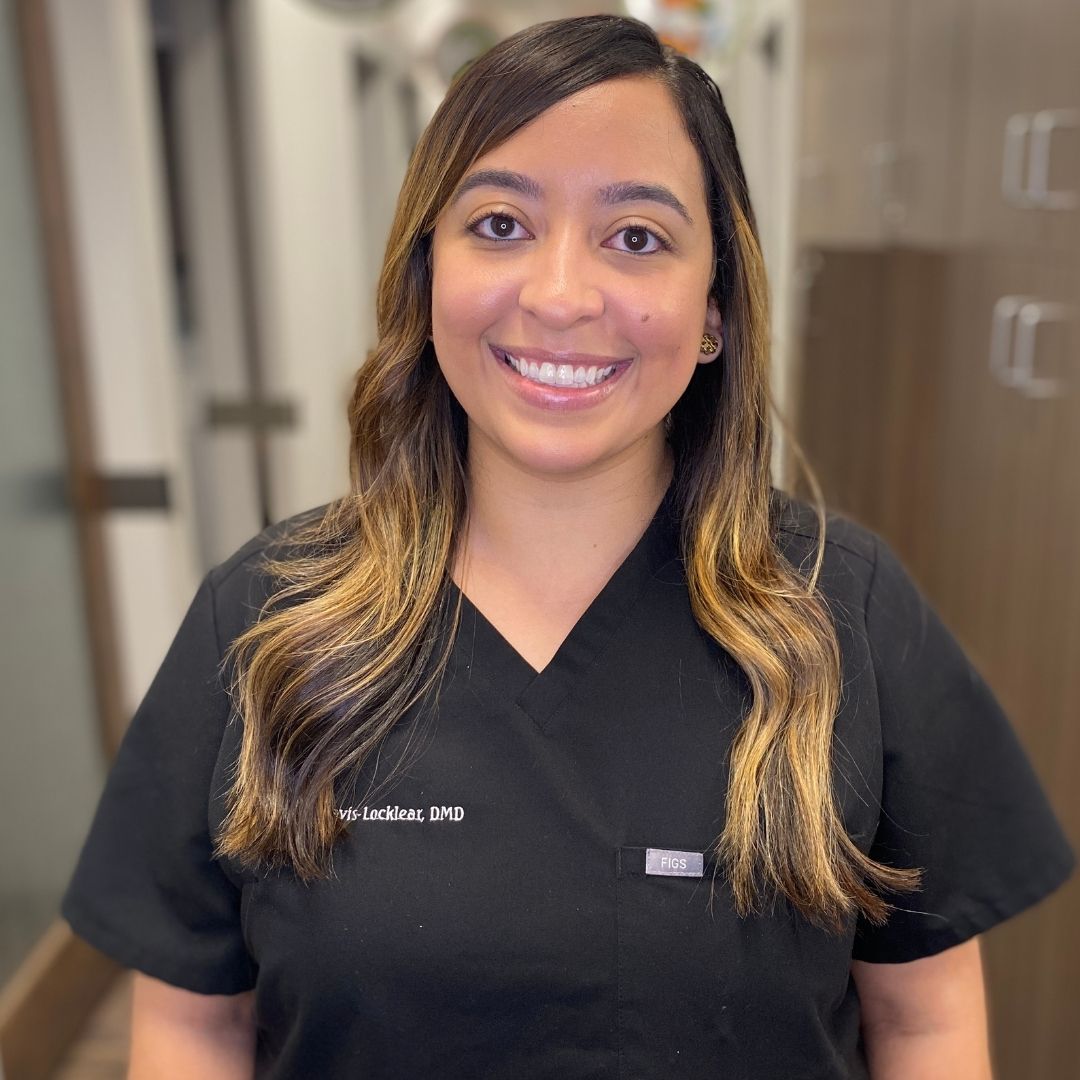 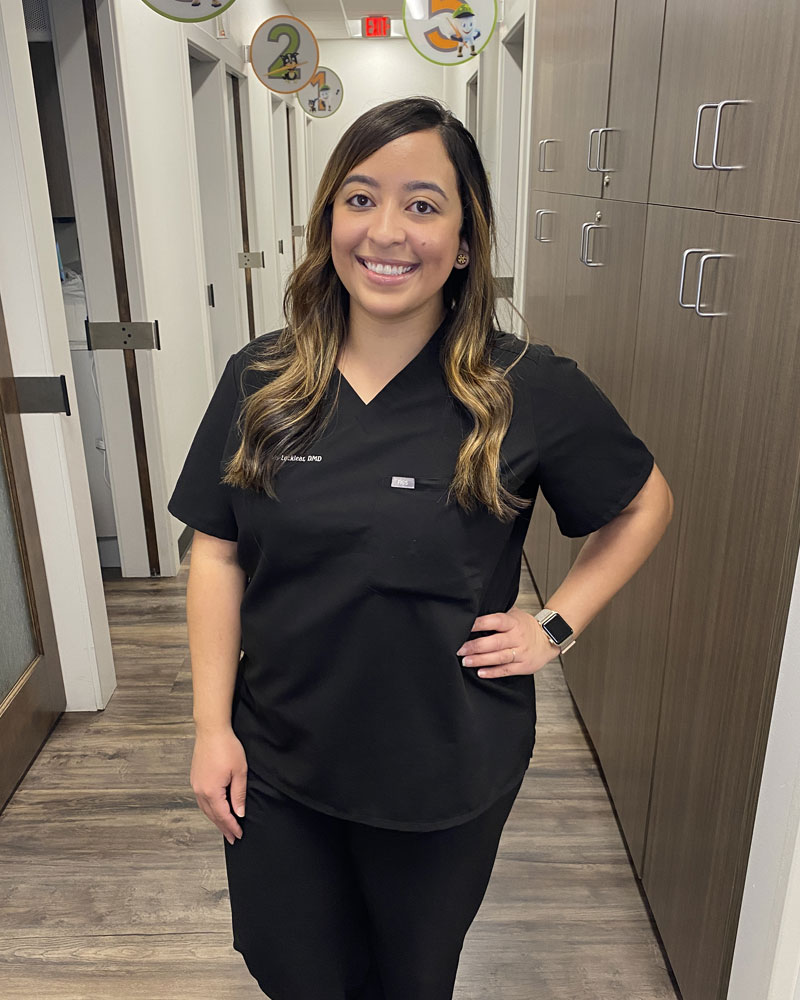 Dr. Brianna Chavis-Locklear grew up in Prospect just outside of Pembroke, NC. She attended UNC-Chapel Hill and majored in Psychology. After graduation she went on to attend dental school at ECU School of Dental Medicine. She is a member of the North Carolina Dental Society, Society of American Indian Dentists, and the American Dental Association.

Her older sister came home with braces one afternoon and she became mesmerized. She started drawing braces on the teeth of the people in her parent’s magazines. She was hooked.

Once Dr. Bri (as she wants all her patients to call her) became a dentist she knew she wanted to work with kids. She loves working with kids as there is never a dull moment.

Pet(s): When not at the office, Dr. Bri enjoys spending time with her Goldendoodle, Clemmie.

Dental Tip: Make sure you visit the dentist twice a year to stop small dental problems from becoming big ones. 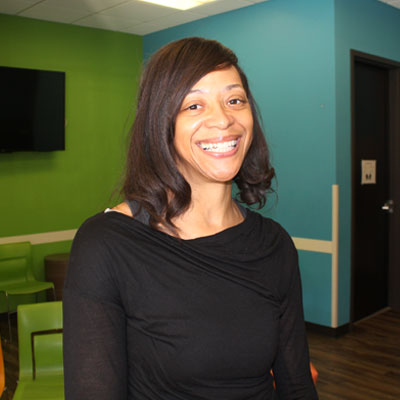 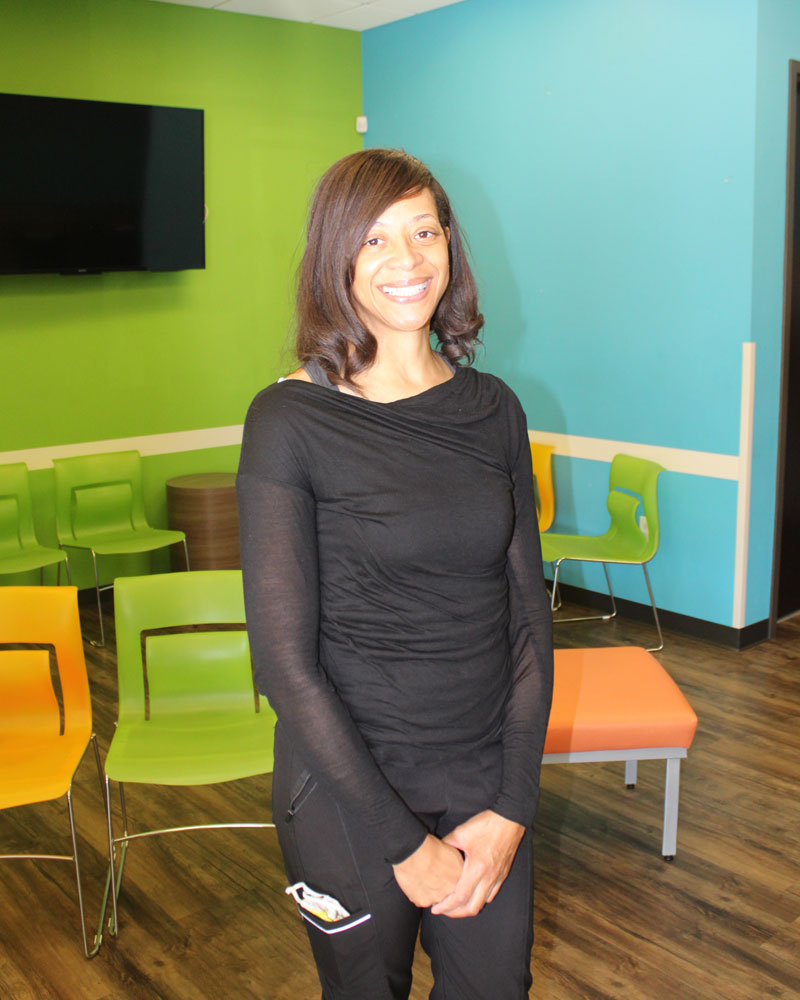 Dr. Donna Alexander was born and raised in Winston-Salem, NC. She received her undergrad from the University of North Carolina at Charlotte, and attended dental school at the Howard University College of Dentistry in Washington DC.

Dr. Alexander decided to dedicate her career to treating children because, in her words, “Kids are fun! I enjoy the challenge to win patients’ trust and confidence and show them that coming to the dentist can be fun!”
Dr. Alexander makes her home in Winston-Salem, NC with her cat named Gunnar.

Dr. Alexander is a member of the American Dental Association and the Old North State Dental Society. 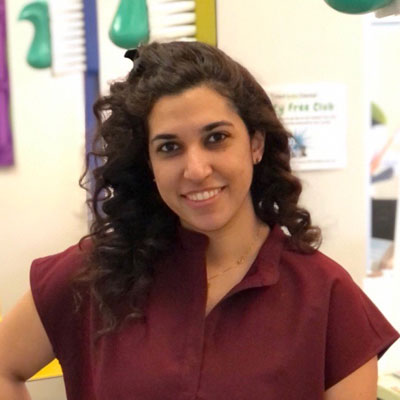 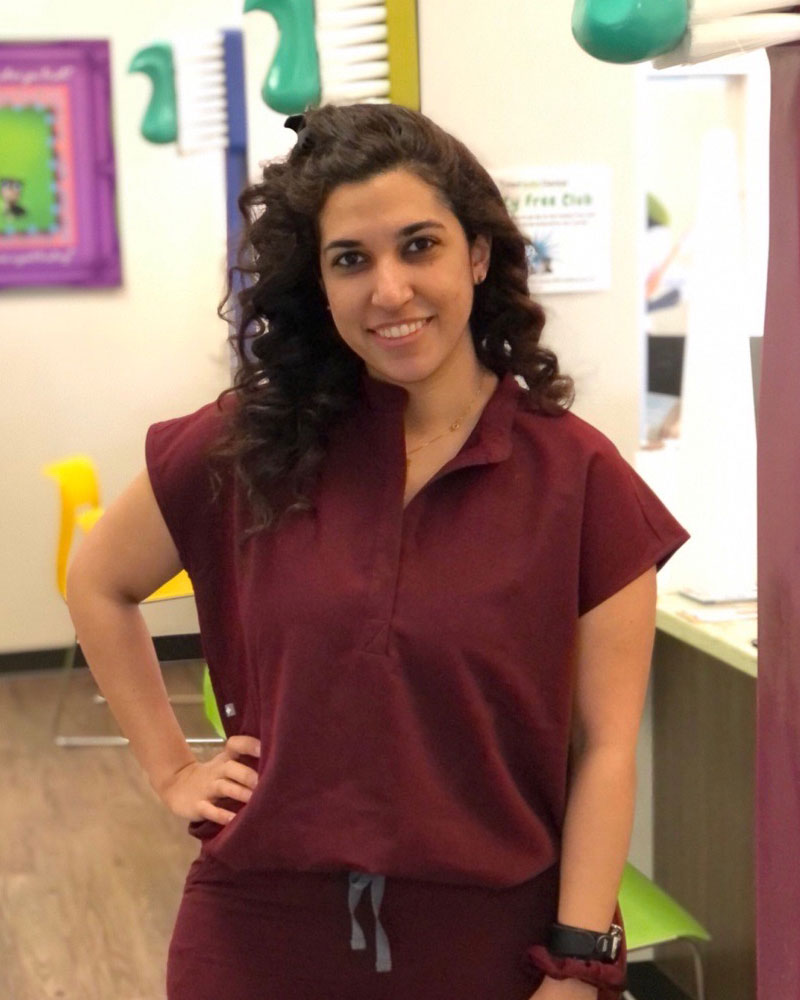 Dr. Shima Ghattan is a Greensboro native. When she was in 4th grade, she started feeling she wanted to be a dentist when she grew up, but later when she started volunteering at the NC Mission of Mercy dental clinics across North Carolina, she knew dentistry was her calling. She went on to join the Wolfpack at North Carolina State earning degrees in Biologic Sciences, Human Biology and Nutrition Science with minors in Health, Medicine and Human Values.

After graduating NC State, she went on to A.T. Still University – Arizona School of Dentistry and Oral Health to realize her dream of becoming a dentist. Armed with her Doctor of Dental Medicine, she decided she wanted to work with kids. Dr. Ghattan loves helping kids relax and make their trip to the dentist fun with her goofball attitude.

Favorite Hobbies: When away from the office Dr. Ghattan enjoys traveling the globe and hiking the many trails of North Carolina. She’s also an accomplished artist! 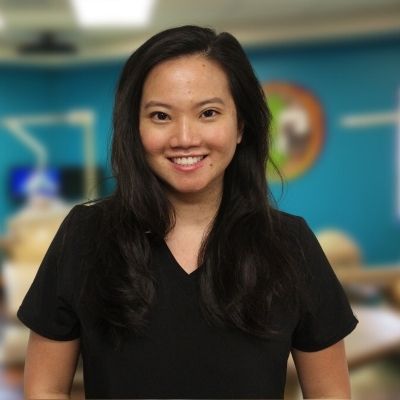 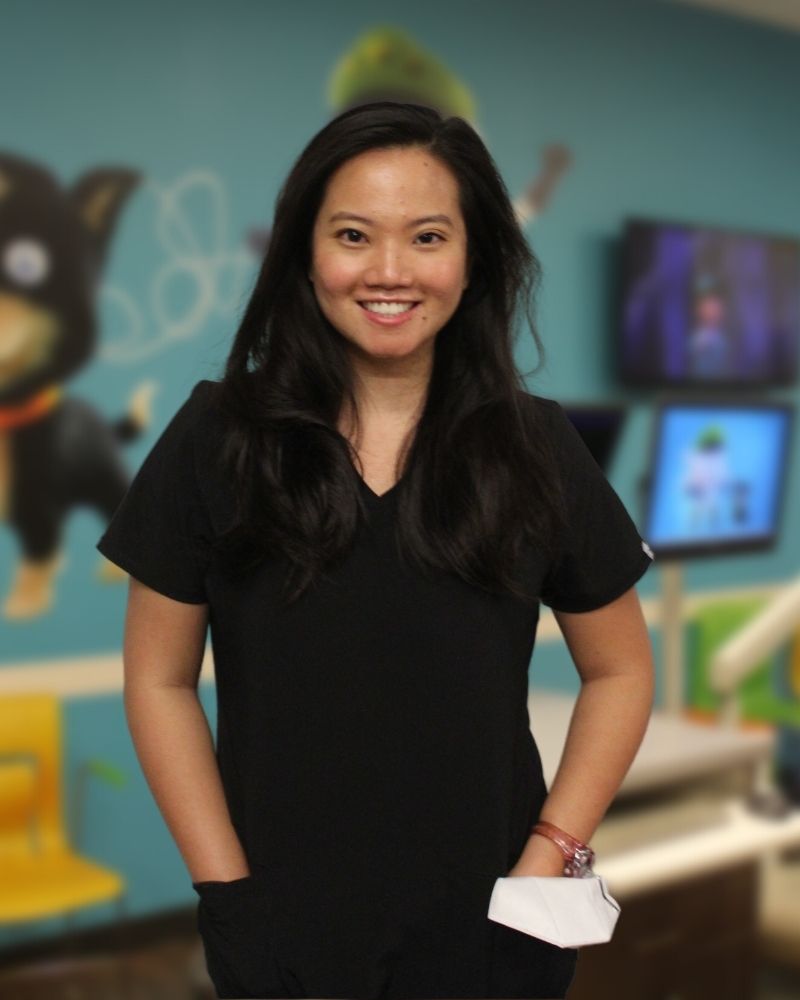 Dr. Kelly Nguyen was born in Honolulu, Hawaii. She left the beaches of the Pacific for the beaches of the Atlantic in Charleston, South Carolina. She grew up in a large family and decided early on to become a doctor to stand out from her siblings.

She attended Clemson University and earned a degree in Microbiology. She went on to get her Doctor of Dental Medicine from the Medical University of South Carolina.

Dr. Nguyen is an active member of the American Dental Association and the Academy of General Dentistry.  She loves the opportunity of providing not only treatment but also education to her patients and the community, especially children.

Favorite Hobby: Whether it's cooking for herself, sampling new cuisines, or exploring new restaurants, Dr. Nguyen considers herself a serious foodie.

Dental Tip: To make brushing fun for your child, Dr. Nguyen recommends playing their favorite song to help those two minutes fly by! 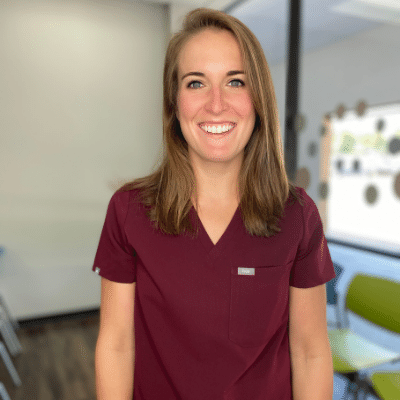 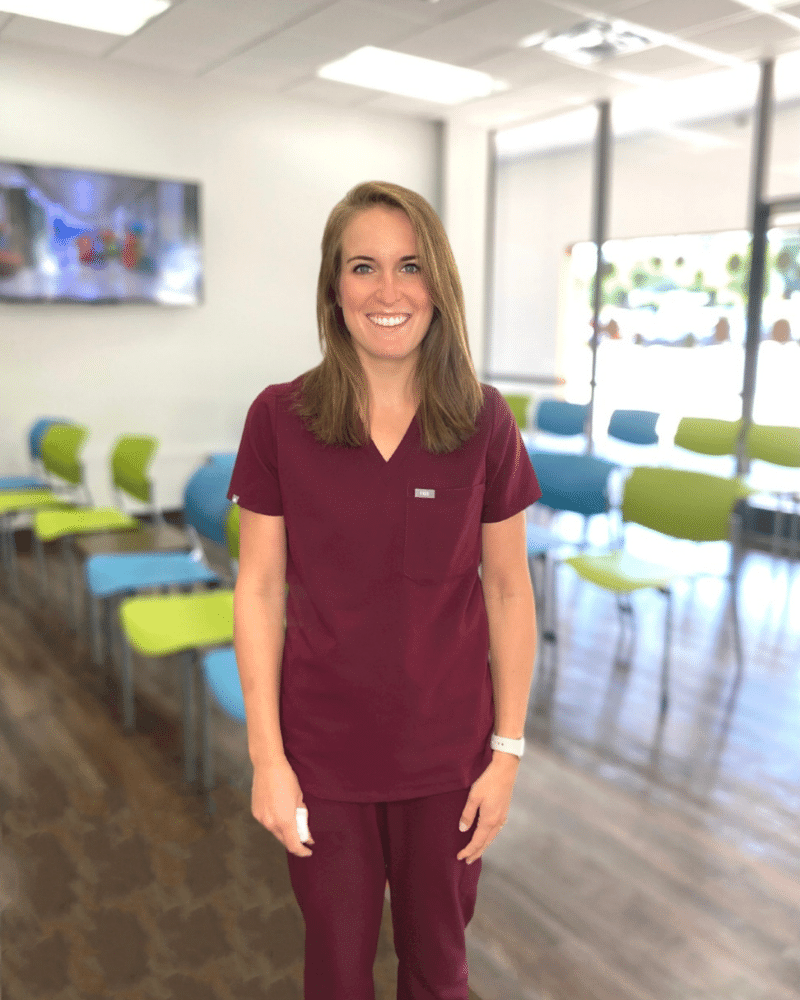 Dr. Caitlin Miller is a Greensboro, NC native. She attended Clemson University and received her undergraduate degree in Biological Sciences in 2015. She received her Doctor of Dental Medicine Degree from the Medical University of South Carolina in 2021.

Dr. Miller states that she became a dentist because, “dentistry combines my love for science, my commitment to service, and my love for people. It offers me the opportunity to make a difference and it’s a privilege to see that difference in the smiles, confidence, and hopeful futures of those I serve.”

Travel Bug  Dr. Miller has been to 48 US states, Alaska and Hawaii are next on the list.

Community  When she's not with her patients and dental team, she loves to spend time with family and friends.