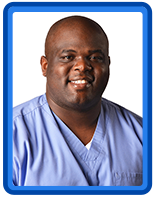 Dr. Rolandas Lamarc Hill grew up in Vanndale, AR. He attended Arkansas State University and received a B.S. degree in Biology in 2007. After graduation he completed a year of research at Arkansas State. He continued his education at Meharry Medical College in Nashville, TN and received his DDS in 2013. Dr. Hill also completed his General Practice Residency at Meharry Medical College in 2014.

Dr. Hill was inspired to become a doctor as a result of his grandparents’ life experiences with heart disease and diabetes. Although they were able to seek treatment for their medical conditions, seeking dental care was not an option due to financial limitations. That lack of access to dental care for less fortunate people led him to the decision to become a dentist.

In his spare time Dr. Hill enjoys spending time with his daughters, Emery Rae and Kaleigh. His hobbies include: fishing, reading, ATV riding, and watching football.

Come visit us at one of our 5 Triad locations!